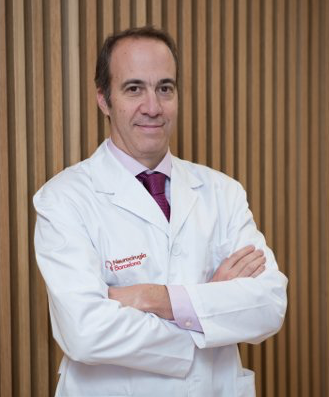 2012 – To date: Head of the Neurosurgery Unit. Neurocirugía Barcelona, Barcelona.

2012 – To date: Head of the Neurosurgery Unit, CIMA Hospital, Barcelona.

1998: Resident student of the Neurosurgery Department of the Are Dureta University Hospital, Palma de Mallorca, July, August and September 1998.

1997: Traineeship as a medical assistant in Calvià City Council, Majorca, during July, August and September 1997.

1996 – 1997: Resident student in the Internal Medicine Casualty Department of the Clinical and Provincial Hospital of Barcelona during the 1996-97 academic year. Doing 12-hour on-call duty shifts 2-3 times a month.

1996: Resident student of the Internal Medicine Department of the Are Dureta University Hospital, Palma de Mallorca, from July 15 to September 15.

1995 – 1997: Resident student of the Faculty of Medicine Morphological Sciences Department at the University of Barcelona

1993 – 1996: Collaboration during July, August and September from 1993 to 1996, as an assistant (outpatient consulting rooms and Scheduled and Emergency Surgery) of the Traumatology Departments of different hospitals in Palma de Mallorca.

2000: M.I.R. Examination (Internal Medical Resident): Completed on 8 April 2000, obtaining order number 71. Being granted a residency in Neurosurgery in the Clinical and Provincial Hospital of Barcelona.

1993 – 1999: Graduate in Medicine and Surgery from the University of Barcelona. Studies in the Faculty of Medicine (Clinical and Provincial Hospital). General qualification of “Honours”

Participation in the clinical and bibliographic sessions organised by the department, as well as multidisciplinary sessions (neuro-oncology committee, epilepsy unit, neuroradiology, ICU and joint sessions with neurology).

Collaboration with the Faculty of Medicine:

2005 – To date: Lecturer in Neurosurgery at the Institute of Higher University Studies (IAEU). University of Barcelona

2005 – To date: Lecturer in neurosurgery for doctorate courses at the Institute of Higher Psychological Studies (ISEP).

2004 – To date: Lecturer in Neurosurgery for doctorate courses at the municipal institute of healthcare assistance (IMAS), Autonomous University of Barcelona